Youtube suggested me a video with History of the Romance Languages. I watched it and liked it. Starting from Proto-Italic it shows on the map the spread of the languages along with a time-line. So much information in so comressed format.

And Verbix conjugates the verbs of much of the Romance languages shown in the video:

Moreover Verbix docs has a lot of information of the other languages mentioned.

In linguistics, cognates are words that have a common etymological origin.

For instance today’s Romance languages (Spanish, French, Italian, Romanian, Catalan, etc.) all share the same “parent” language, the Latin. And therefore these languages have a lot of cognates.

Starting from October 2019, there are verb cognates on the Verbix website. On the cognate pages you can check out how the Indicative present looks like in different Romance languages.

The Italics were all the peoples who spoke an idiom belonging to the Italic branch of the Indo-European languages and had settled in the Italian peninsula.

As seen on the map, the Italic tribes and Italic languages were spoken on a very small area in the beginning. One of the languages, though, was Latin. The Roman conquests eventually spread it throughout the peninsula and beyond in the Roman Empire. The evolved dialects of Latin gave birth to the Romance languages; French, Spanish, Portuguese, Italian, etc. that are nowadays spoken allover the world.

Years ago there was the possibility to print out high-quality verb tables from Verbix for Windows.

This was in the ages when there was a very limited number of supported languages in Verbix; designing state-of-the-art layouts was tedious and time-consuming, and therefore the Verbix for Windows started to use HTML as the “layout engine”.

In early days of the HTML layout the internal webbrowser used by Verbix was very limited. Therefore the verbtables didn’t look so nice. Little by little the design has been improved, yet the printouts still don’t look like a “book page”.

Now with the latest version of Verbix for Windows, there is the possibility to export Spanish verb tables as PDF.
And these verbtables are again like “book pages”.

I visited New York a month ago or so.

What’s amazing is that your hear so many languages and people from different parts of the world there.

Not only are there tourists coming from all over the world, but a lot of people have found their home there. New York City is home, for instance, to the largest population of overseas Chinese outside of Asia.

I took the photo at the right in Chinatown, where you could hardly see any text in English.

While Chinatown is in the South-East of Manhattan Island, the largest concentration of Hispanics is in the north, as seen on the map. 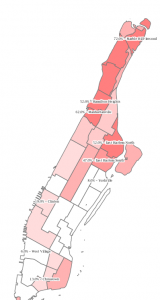 Today I noticed the Verbix server doesn’t work :-(. Fortunately this blog is hosted on another server, as are also Spanish and Portuguese verb conjugators.

Hopefully the main site will be fixed soon, so that you can conjugate verbs of all the other 100+ languages… 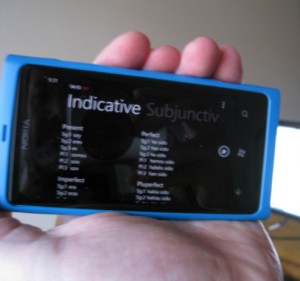 There’s an “Easter Egg” in Verbix 9 for Windows.

An Easter Egg in software is a hidden feature that is not documented. In Verbix 9 the hidden feature creates a Spanish Verb Conjugation book and saves it as PDF. This article describes how to use the book. As a matter of fact, this book is used exactly in the same way as any verb conjugation book that you can buy in a bookstore!

1. First look up the verb from the verb index.

2. Check the verb model that the verb refers to.

About the Spanish Verb Conjugation Book

The book is free!

One of the new features of the upcoming Verbix 9 is the possibility to create PDF documents of the verb conjugation tables.

This makes it possible to put your favorite verbs on your iPhone or any other gadget that supports PDF.

Or simply print out the verb table.

The PDF is supported first for Spanish verbs. Please vote for getting PDF support for other languages, too.

The Korean and Arabic languages were added about in the same time on the Verbix website. Both languages support conjugating verbs since a few months back.