The Sigynnae (Sigynni) were an obscure people of antiquity. They are variously located by ancient authors. Sigynnae — as mentioned by Herodotus — were “a people widely spread in the Danubic basin in the 5th century BC”.

The Sigynni were likely to be Iranian (Indo-Aryan) people.

I found a great website with verbs of Romance languages.

After browsing for more information I found out in a book called Ethnic Groups of Europe: An Encyclopedia that “After 1880 Friulians moved to Romania (then part of the Austro-Hungarian Empire), where they worked mainly as craftsmen or in the quarries near the town of Greci”.

Still amazing that a language survives there in these days!

After the latest ice age, Europe got free from the ice and the population could move to new areas from the refuges — or the inhabited areas during the ice age.

During this era Europe underwent the neolithic revolution, the time when people switched from hunter gathering to domestication. It is assumed that the Indo-Europeans brought the domestication to Europe and therefore won terrain over the other linguistic groups.

Almost three years ago I updated the a webpage that tells where a specific language is spoken.

This page ws called “Where on Earth Do They Speak…”. The page itself consists of a list of languages, and clicking the language name would show the location on map.

Now there’s a new page that lets the user zoom and pan the world and see what language(s) are spoken on an area of interest. This new Languages of the World page is available here: http://maps.verbix.com/languages.html

Finland is a country with two official languages: Finnish and Swedish. Swedish is spoken mostly on the coastal areas, including the capital Helsinki (Finnish) / Helsingfors (Swedish).

Because Helsinki/Helsingfors is a bilingual town, all the placenames are shown in two languages. Sometimes there are mistakes, however, that can mislead people.

The picture at right was taken in Kronohagen, Helsinfors. Kulosaari as shown on the shield is Brändö in Swedish. So either Finnish or Swedish speaking cyclists will find themselves in wrong place 😉

During the summer vacations we visited Denmark. At one store I bought a book about Danish colonies around the world! 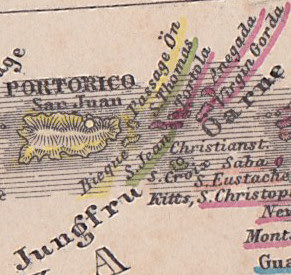 One of the colonies was in the West Indies, on the today’s U.S. Virgin Islands. This former Danish colony was sold to the U.S. under one hundred years ago.

The Danish West Indies islands are marked in green in this map from the school atlas of my grand grand father.

Today Danish is not spoken on the islands, except if you happen to encounter a tourist from Denmark.

Did you ever wonder where the Teutones lived and when? If you did, then you can see the data at http://ethnohistory.verbix.com/Teutones/.

This new website displays ethnohistory records of 100’s of European people, where they originated and where they dwelled.

One of the best staring points on the Ethnohistory website is the page that groups the peoples by language: http://ethnohistory.verbix.com/languages/

Somewhen in the past I got familiar with a site called Ethnologue. It contains information about all languages in the world.

One thing that I was missing though is the lack of maps that would better show where the languages are spoken. At that time there wasn’t any other site either that would contain many languages plotted on the map.

So where is Muna spoken for instance?

I happened to have alist of languages along with coordinates so I decided to give Google Maps a try. With a minimum amount of (JavaScript) programming I got the languages on the map.